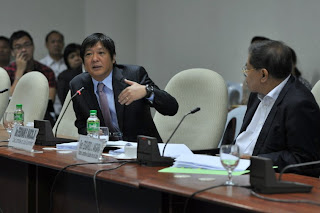 SENATE OFFICE, Manila, March 11, 2011-Senator Ferdinand "Bongbong" Marcos, Jr. asked Malacaňang to execute a student-friendly repayment scheme to ensure success of "study now-pay later" program of the government where the Department of Education (DepEd) should carefully study the feasibility programs.
“The government, through the Department of Education (DepEd), should know by now the pitfalls of the student loan program and be able to avoid them by crafting a better repayment scheme that is both efficient and workable whereby students would not be saddled by payment obligations long after graduation,” the Senator said.
Last week, the Senate heard various bills sought to beef up schools financial program particularly by establishing a national student loan program, reiterating that the DepEd should carefully study the feasibility of the measures as well as analyze successful models all over the world.
Marcos cited the experiences in some schools in England and in the United States, whereby students could not timely meet their loan obligations to their schools, such that their delinquencies extended even after they have graduated.
It was revealed in the hearing that the Philippines was no stranger to the phenomenon in the Western countries, since, according to the DepEd, student loan programs presently in use in the Philippines have a dismal repayment rate of 0%, although the rate has recently improved to 4%.
Study-now-pay-later program is a scheme of providing loan or credit to the poor but deserving students who are enrolled in any of the DepEd priority courses in selected education institutions in the Philippines.
Relative to this, Senator Edgardo J. Angara also urged the DepEd for the overhauling of the student loan system in the country, saying that there is a need for the restructuring on it so that we can subsidize the education of our future, professionals, scientists and leaders. (Jason de Asis)
Posted by Unknown at Thursday, March 10, 2011

We are hoping for the best in this move. Sana nga po makatulong ng mas maganda.

That was needed in our country. Thank you for the two good senators.